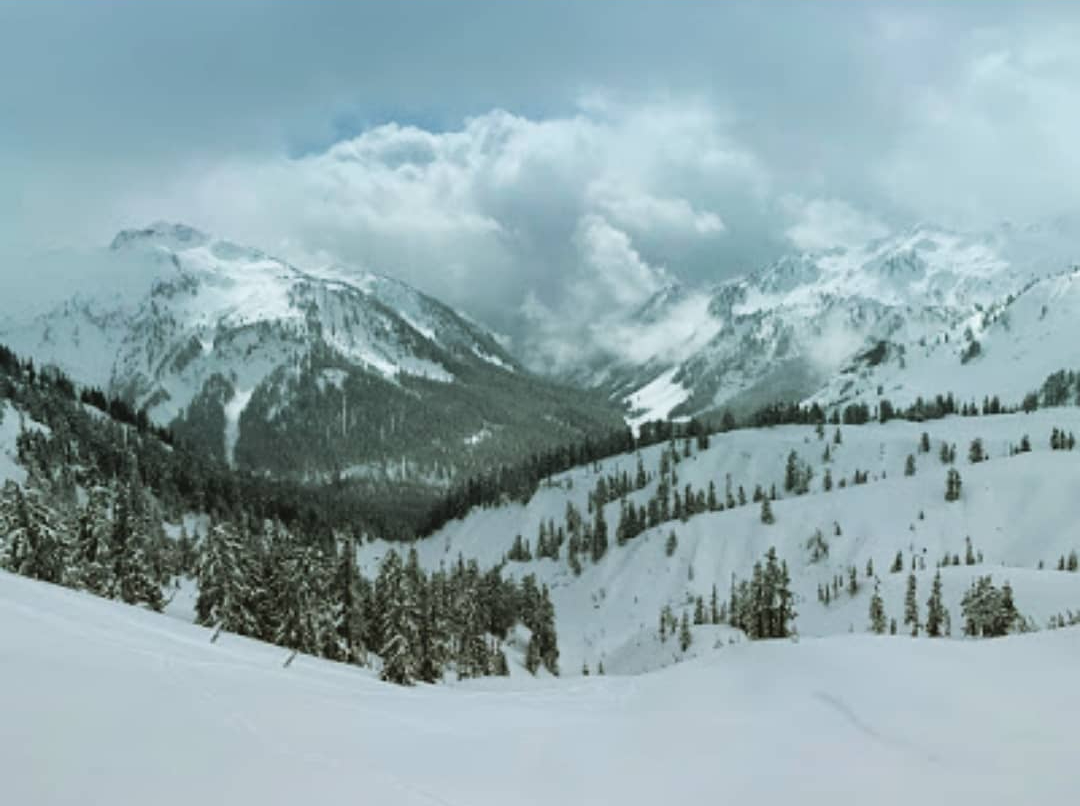 After my last trip was cut short and I had to fix my van, I was ready to spend some time in Tahoe with my friends and ski my heart out.

So I hit up the boys from my hometown and rallied them to all go to Sierra at Tahoe.

Skiing Sierra With The Boys

Holy shit was this a day for the books!

Very rarely do I get to ski with 15 of my friends all on the same day.

Man it was like deJa Vu. I had grown up with all these homies at Sierra, which made it an even better experience.

We were sending all the jumps in the alley big time.

I watched my buddy Chris die on a misty 7, and get up from the gnarliest fall I have seen in a while. Poor guy hurt his knee pretty good though.

Trip Down To Mammoth

While skiing at Sierra, I talked to my buddy Jesse and started to plan out a trip down to Mammoth. I hadn't been down to Mammoth yet this season and I was very excited to go there.

To make it even better Jesse had a condo he was renting for work, and we could all stay there.

Tubthumping was a new song I learned on the trip, and damn is that a catchy beat!

My other buddy Tristin was in Mammoth as a random coincidence with his converted bus. After one snowy day on the mountain, he spun off the road and did a full 360. Luckily there was a big parking lot there without any cars for him to hit.

I didn’t actually see the close call accident, but it sounded like it could have been so much worse!

We skied for 2 days and the 2nd day was such a nice pow day!! Skiing to the top of the gondola is a rare thing on stormy days, but we got 2 laps to the top and were able to ski some blower pow!

More Bullshit With My Van’s Tranny

Right as I was leaving Mammoth, my van’s transmission started to act up. This irritated the shit out of me.

I had just fixed it!! I spent all this time and money figuring out what was wrong and how to replace the conductor plate in my transmission.

Not only that, but I was a solid 150 miles away from my parent’s house where I could fix it. Aaaand Jesse drove with me, so he was going to have to deal with my terrible car luck also.

The good news is that after I restarted my van, I was able to drive it all the way back home and had almost no trouble, aside from having to keep it at less than 3k RPM’s.

God this was so irritating. This issue was causing me so many headaches in all other areas of my life. I was working less than I should have been. I was skiing less than I wanted to. And of course, I was staying in my parent’s driveway trying to figure out how to fix a transmission -- the most complicated part of any automatic car.

So I took it to a Mercedes Benz specialty shop and had them diagnose it.

They told me the conductor plate that I had put in was faulty from the factory, and I was going to need to replace it again.

As frustrating as having a factory ship faulty parts, it was nice to know what my problem was.

So here’s the thing, I was invited to go ski with the Line skis pro team for the next week up in Washington. Housing was a little tight so I was only able to go if I had my van where I could sleep.

This was a great opportunity that I was super excited about!

This meant I had to find a new conductor plate, get it shipped to my parent’s house, and fix the van in less than 3 days…….

Now that I was putting a lot of pressure on myself to fix my van in time, I came up with a good solution.

It had never occurred to me that I could just buy the part from the shop because they get next-day shipping on all of their stuff packages.

Thank god, this allowed me to get the conductor plate the next day and put it in.

Putting in the newest conductor plate was a smooth process, and my van was back in working condition =D.

I had a ton of work that I needed to finish in the two days before I left for Washington, and there was an event at Sierra that I wanted to go to.

So two busy ass work days later, I was ready to hit the road!

I went to Sierra and was fortunate enough to be able to meet up with all my friends. The event was very simple because of COVID regulations, but nonetheless a ton of fun still!

Man this was the 2nd day all season that we had a group of 10 plus good homies who were throwing down in the park. It was way too much fun!

After skiing the entire day, it was time for me to leave and start the journey towards Washington.

It can definitely be brutal to work in the morning, ski hard an entire day, and then drive for 3+ hours……..

But that’s what I gotta do to do everything I want :).

After driving for 3+ hours, I slept on the side of the road, then continued my drive nice and early at 4:30 a.m.

Once I got up to Washington, I met up with my buddy Connor and the rest of the Line team on Monday morning.

The conditions weren’t great on the first day, but they were amazing the rest of the week!

Although I am more of a park skier, it was still super fun to shred in those skis!

The rest of the week was absolutely gorgeous weather!!

Skiing with all those big dogs was super fun, but it was even more fun to chill with them in the house after skiing each day.

The house was 3 stories and full of fun games, a hot tub, big ol garage, and a perfect living room for us all.

Later in the week, I went to Crystal with the skiers on the blades and shredded some more all-mountain.

In short, after the skiing was done, everyone left back to their homes…….

Then we got some terrible news, one of the guys tested positive for COVID and was pretty sick the last day of the shoot.

Since we were all in the same house and driving in the same cars, it was looking pretty slim of not having COVID.

So I scheduled a COVID test online, and literally 15 mins later took it. (pretty stoked on how fast that was!)

I had to lie low for a few days, then when I got my negative results back, I made plans to see Connor and go skiing with him later in the week.

We made the 3-hour drive to Mount Baker, the ski resort that gets the most snowfall in America. Such a cool place, we didn’t even bother buying a ticket because we just toured in the side-country the entire day.

There was literally a bottomless amount of powder out there.

We got fresh tracks down a face that had not been skied in quite some time.

The next day, Connor and I went up to Snoqualmie to ski park before I left for Utah.

Aside from the busy ass lift lines, it was a killer day!

Then I continued my journey towards Utah.

I hadn’t skied in Utah the whole season and was super stoked to go shred Brighton. That place has one of the best parks around!

At this time, it was the middle of April and more than half of the ski resorts had already shut down.

But it snowed a ton one day and we had a legendary pow day at Alta and Snowbird.

My god that was an unreal day, I met up with two friends who are phenomenal skiers, and one of them was a local at Alta so he knew the mountain super well.

The day after I toured right by Alta in an area called Grizzlies Gulch. This area is iconic in the ski world because of all the gnarly terrain.

Chads gap and pyramid gap are accessible directly from the parking lot and take less than 30 mins to get to.

Then I went to Brighton again and skied their park for an entire day.

Man that shit was so fun!!

For closing day at Alta, there is an event called ‘Frank’. I believe it is named after the founder of the ski resort, but regardless it was the biggest party I have ever seen on the hill.

I’m talking about 100 plus people standing on the side of a run partying their asses off. It was quite a ridiculous sight hahahaha.

After Frank, I left Salt Lake area and headed down south about 2 hours to meet up at a cabin with a new friend of mine, Will.

None of which I was expecting…….

I had such a fun time here! To make the whole experience even better, there is no cell service out there so I was not distracted by my phone during the days.

Each morning when I would go to work, I would drive up the road about 10 minutes to this spot that had great cell service. The best part was I would literally just park on the side of the highway, and since we are out in the middle of nowhere, it didn’t matter.

Will’s whole thing about this place is that we primarily build features that you would never see in a resort’s park.

After a week at the cabin, I went back up to Salt Lake for a day to meet up with my old roommate, Brian. We literally chilled in my van in some random parking lot and caught up.

The next day I worked, then the following day I went to Snowbird to go shred. The weather forecast predicted some snow, but I was not expecting 11” on fresh….

It was April 27th at this point! Snowbird was the only resort that was still open in Utah, and the temperature was cold enough to make the snow a super fun time to ski.

Such an unreal day, and then I hot tubed at my buddy Ben’s place and hit the road to come back out to Tahoe for Jett’s B-day and a friend’s wedding.

And now I gotta live some more before I can write the next part =).