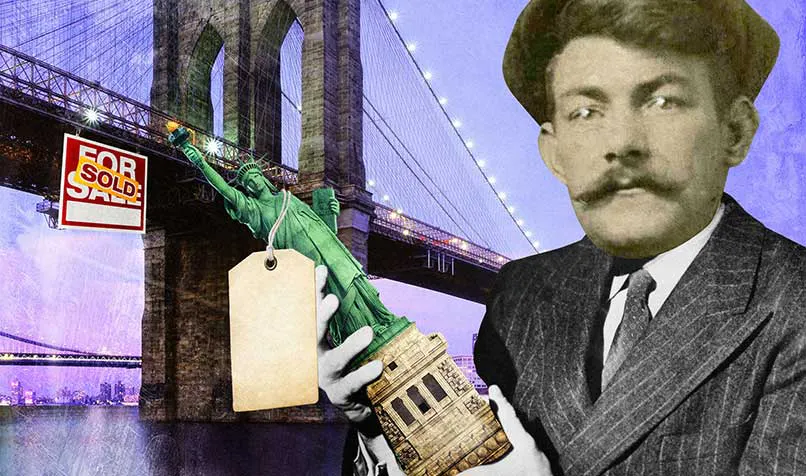 The Man Who Stole The Brooklyn Bridge

George C. Parker has conned innocent victims into buying every national landmark from the Brooklyn Bridge to Grant’s Tomb. He even coned his way out of prison and set himself free on 1 of his 3 convictions.

Not your everyday snake oil salesman can go down in history as one of the most accomplished con men. Snake oil is petty compared to what George C Parker could sell you.

Nowadays we hear about the phrase, “If you’d believe that, you should buy this bridge!” It all started with a little boy being born into a middle-class New York family that immigrated to the US from Ireland in pursuit of the American dream. but George had a different dream than most other Americans…

How He Sold The Brooklyn Bridge

After arresting the 3rd crazy person who was convinced they owned the Brooklyn bridge, the police started to believe these insane immigrants attempting to set up a toll booth to cross a government bridge.

Because of this, George C Parker has gone down in history as one of the most notorious scam artists.

How did he do it?

Dressing up in fancy attire, studying the police schedule, and learning which new immigrants had money he could swindle from them were all part of his cruel ploy.

George would approach obvious immigrants in a friendly manner.

At first, he would start by telling them how he is looking for someone to work in the toll booth he was soon to erect at the beginning of the bridge. Seeing that the person was an immigrant, he would tell them how hard working they must be if they left their home country to come to America.

Since they were clearly hard-working people, he would offer them a job as the new toll booth attendant. This would transition into George telling the immigrant about how lucrative owning the bridge was about to be for himself.

After building up desire in the mind of the unsuspecting immigrant, he would then transition into giving the immigrant a unique and lucrative opportunity of becoming a business partner and owning some of the bridge.

Along the way, he would take them to his nice (and fake) office just around the corner. Here, George would present his wonderful looking forged documents to the buyer.

Since these events were in the late 1800s and early 1900s, they were not documented great. But there have been reports of him selling it for as much as $50K. (About $1.3M in today’s money)

So here’s the thing, not only did he sell it to people as a partial ownership, but also as far as a complete owner. He would frame the question around each individual person’s perceived net worth.

This sort of brilliant action caught some attention...

Some other genius con men decided to replicate his idea. William McCoundy (often referred to as I.O.U. O’Brien) sold the bridge a handful of times also.

But here’s the thing. William was convicted of grand larceny in 1901 and served two and a half years in Sing Sing prison. Not a glamorous life for the “owner of the countries largest bridge”.

It took a while for the police to catch on...

The first handful of victims proceeded to set up a toll booth on the bridge while the traffic was in full force. The police were quickly notified of these events and came to stop each and every lunatic that started charging people to use government land.

Each and every “owner” of the bridge was dragged off, considered a lunatic, and sentenced to prison.

But get this, the police did not realize these crazy people were actual victims of George’s cruel ploy. The poor immigrants were set up in his trap and did not know any better.

It wasn’t until after the 3rd person told the police the exact same story. Each time they would bring the police to an office space that was empty, and show them the forged documents. This is when the police finally caught on.

What Really Took The Bridge Off Of The Market?

The selling of the Brooklyn bridge quickly ended when the police put up numerous signs around the bridge saying it is “Government Land” and was “Not For Sale”.

What was George going to do if he couldn’t sell his beloved bridge anymore?!

There was only one thing to do next...

Sell the Madison Square Garden! And the Statue of Liberty, the Metropolitan Museum of Art, and even Grant’s tomb.

This guy was here to push the limits of what people could believe!!

He successfully sold these other national landmarks with the same tactic as the bridge.

With the help of his fake office, George was able to poss as the general’s grandson to convince his victims that he owned it.

In 1928, the Brooklyn Daily Eagle wrote about how George pleaded guilty for grand larceny of the second degree in 1908 and was sentenced to Raymond Street Jail.

On his first day, Sheriff Flaherty set down his hat and coat to greet the workers and prisoners.

George literally put on the hat and overcoat, and walked out the front door without anyone raising an eyebrow…

So get this, on his way out, he was even salaamed by a guard who wished him to have “a Happy New Year”.

Sure enough, he was a free man again and ready to sell yet another national landmark.

But This Story Has To Come To A Tragic Ending

After his 3rd conviction, he was sentenced to life in prison in 1928 and died in the Sing Sing prison in 1936.

At least the inmates loved to listen to his stories of how he could convince people to buy all of the different national landmarks. The legends say he was quite the popular man in prison.

Thanks to George C. Parker, we can now repeat the phrase “I have a bridge to sell you” to our gullible friends.